Keep up to date with our latest news!

Please find attached our curriculum overview for the year. Please note that these are subject to change.

Our fixture list for upcoming league matches can be found below. Letters detailing arrangements for each game will be sent to the children selected for each fixture approximately two weeks before each game. Please remember to check back regularly for details of future fixtures.

On Friday 6th December, 30 children from Year Two took part in the Mini Olympics at Cleves School. The children took part in lots of exciting relay races including an obstacle relay, hurdles and basketball dribble. They demonstrated amazing sportsmanship, working together as a team and cheering each other on. The Year Two team did very well and won 3 out of the 7 races and came an amazing second place overall.

They represented Ashley School extremely well. Congratulations to all of those who were involved!

On Tuesday, a team of Year 6 boys played their second match of the week when they travelled to Cardinal Newman to play the first knock-out round of the ERPSSA football tournament. The game was an exciting one and the Ashley team played incredibly well together. We made a fast start with Joe finding the top corner from just inside the box before Charlie added a second with a neat finish. Cardinal Newman pulled a goal back before Daniel grabbed another to re-establish our three goal lead. In the second-half the game continued in a similar fashion: Max (x2), Charlie and Freddie added great goals and Cardinal Newman could only add a consolation. Full-time score was Ashley 7 – 2 Cardinal Newman.

On Tuesday 26th November Ashley Girls’ Football Team played a match against Pyrcroft Grange.  It was a hard battle of a game with our amazing goalkeeper Jaia saving every shot Pyrcroft took. Great credit also needs to be given to our defenders Chloe and Stephanie, for their excellent tackling of every player who tried to attack. Iris, Olivia and Emily were excellent in midfield and worked hard throughout to try and break-down the opposition. Sienna also played well and worked very hard upfront and created a number of chances during the game. In the end, a draw was probably a fair result – the game finished 0-0.

On the 25th of November 2019 a team of Year 6 boys played away against St Jude’s in Egham. The team made a great to start to the match and found themselves 2-0 up at half-time with goals from Daniel and Charlie. Despite great performances all-round, the second half slipped away from Ashley as St Jude’s produced a great fight-back and took a 3-2 lead in the closing stages. Unfortunately, with the light fading fast, there was no time for a Liverpool-style late comeback and the game finished 3-2.

On the afternoon of Monday 18th, 11 pupils from Year 5-6 went to Walton Oak to play Tag Rugby along with some Year 4 children. The team was made up of 8 boys and 3 girls: Charlie, Harry, Benjy, Scott, William D, William B, Josh, Joe, Sienna, Amelie and Chloe. Our first game was against Burhill and we won that game 6-2. We carried on our winning run against Walton Oak ‘A’ beating them 8-3 and Walton Oak ‘B’ 6-0. Our toughest game was against St James but we managed to get a 6-5 victory. We then ended our day with a 9-0 win against Walton Oak ‘C’ meaning that we ended the day undefeated and in first place overall!

Well done to Charlie for receiving the referees 'Most Valuable Player' award for the Year 5/6 team. Congratulations to all involved.

On the afternoon of Monday 18th, 8 pupils from Year 4 visited Walton Oak School for a Tag Rugby Tournament. The team was a mixed team of boys and girls, some of whom had, until recently, never played rugby before. We played 5 matches against other local schools, winning 3, drawing 1 and losing 1 by a single try. There were some epic displays of defensive and attacking rugby resulting in some great tries bring scored by all team members.

On the 25th of November 2019, the Ashley Year 5 football team went on a minibus to St Judes and played an outstanding game of football.

Will scored the first goal with an amazing assist by Luke. St Jude’s were looking very good after the goal, however Ollie booted it up to Will for Ashley’s second goal. Ollie had an outstanding game as well as Will who scored a hat–trick. After half time, Ashley scored another before falling apart when St Jude’s scored 2 goals. The final score was 4-2 to Ashley.

On Monday the 11th of November, Ashley Year 6 boys played away against Manorcroft School in Egham. Despite the final score line of 8-1 to Manorcroft, the teams were actually very evenly matched; we didn’t take our opportunities at goal that we worked hard to create. It was a very physical match between the two sides and we all learnt a lot from that. Our goal was scored by Dan and assisted by Phoenix. A lovely ball was played over the top of the opposition team by Phoenix (from his own half) and Daniel was able to run onto to it, take a touch and smash it past the opposition’s keeper.

Written by Sam and Phoenix.

On Wednesday we were all feeling really excited for the second match of the year. Everyone on the court, Notre Dame included, played really well, with great passing and quick decision making. Ashley got off to a great start in the first quarter, with Izzy scoring our first goal, making it 1-0. In the second quarter Notre Dame levelled out the score, making it a draw. However, Ashley came back fighting with Ollie scoring a beautiful goal and soon after Sienna scoring a penalty shot, making it 3-1. Everyone was feeling great by the end of the first half. Going into the second half, Ashley were feeling eager and enthusiastic! Notre Dame came out, ready to put up a fight and scored their second and final goal. To Ashley team’s amazement, they also scored another two goals in the third quarter, both of which were shot by Amelie. In our final quarter, Chloe and Sophie. W scored two more goals, making the end result 7-2 to Ashley. All of the team played fantastically, with Anna playing her first match and making beautiful passes and keeping on her toes and Sophie. B making some super interceptions. Everyone should feel extremely proud of themselves. We can’t wait for our next match!

Written by Sienna and Anna This year, Ashley School have joined the newly formed Walton, Weybridge and Hersham Sports Partnership (WWHSP). This partnership will allow us to work more closely with other local schools to develop the sports provision we can offer to children during their time at Ashley. As we move through the school year, this partnership will also give all of the local primary schools access to improved staff CPD, the ability to share facilities and resources and an increased local offer of competitions, events and festivals. We are very pleased to let you know that as part of the WWHSP, and our commitment to working more closely with our neighbouring schools, we have entered the following events throughout the school year:

Further information, including application forms and permission letters, will be sent out closer to each event.

Ashley girl’s year 5 and 6 football team recorded their first win as a new established team in a hard fought battle against St Anne’s, with Sienna scoring the winning goal, with only 5 minutes to spare. St Anne’s had plenty of opportunity from some great shots but with our amazing goalkeeper, Jaia managing to stop them they didn’t score a goal. Also, great credit to our defenders Chloe and Steph for their outstanding performance. Not to forget the skilful midfielders Emily and Olivia and the perfect pass from Iris, which created the only goal of this match. All the girls played with passion and heart and definitely deserved the win! As the Ashley Year 5 boys football team left to make the walk to Cleves school, we were really nervous, but excited to play our first match. Ashley had the advantage in the first half, but we failed to score due to some good saves by the Cleves keeper. Cleves went for an amazing long shot which Oliver punched over the bar. In the second half the whole Ashley team continued to work hard, to talk to each other and pass the ball well. Joe and Luke, with some amazing teamwork, set up the chance for Joe, which he took, to make it 1-0. Only a few minutes later, Will struck the ball into the net to make it 2-0. This was the final score and we were all so happy to end our first match as winners! On Monday 21st October, a team of Year 6 boys travelled to Cleves for their first league match of the season. The team played well throughout on a tricky pitch filled bumps and bobbles. Ashley started well and created a couple of good chances which unfortunately weren’t taken. The Cleves side were very strong and had played a game already. Despite all of Ashley’s best efforts (and some great goalkeeping by Harry M), Cleves ended up winning 8-0. Year 4 Mini-Olympics
On Friday 11th October, 30 of the year four children had the chance to compete in Mini Olympics at Cleves School. The children took part in a number of different races, including an obstacle race and a relay race. They demonstrated many different sporting techniques and showed fantastic sportsmanship throughout. The children really pushed themselves, placing 1st in 3 races out of the 7. Their determination was evident during the entire afternoon - so much so that one boy even lost one of his shoes in the middle of a race because he was running so fast! Unfortunately, despite their magnificent performances and attitude, the children just missed out on 1st place overall, by 1 point! However, it didn’t matter as everyone had a fantastic afternoon and were beautifully behaved. They represented Ashley School extremely well. Congratulations to all of those who were involved! When we saw CFS arrive, we were very excited but also nervous. We recognised some of our friends from cubs which settled our nerves as we knew we were playing against friends. It was a very tense first half with neither team scoring. The second half began with two good goals from CFS, but we defended well and got the ball back to our shooters, Sophie quickly scored an amazing goal. Both teams came out fighting for the final quarter, in order to win the match. In the final minute Ollie intercepted the ball and scored an amazing goal, meaning the final score of the match was 3-2 to CFS. It was a brilliant game and both sides played incredibly well. We are looking forward to our next match.

Written by Amelie and Ollie Please find attached the link to the Sports Council newsletter. They hope you enjoy reading it. It certainly is a great celebration of all the sport that is going on at the school!

On Tuesday 11th June, children from Years 3-6 competed in the annual District Sport athletics competition at the Xcel Centre. From running to throwing to jumping, they competed against other schools in the area, and they all did fantastically well!

Overall, we came an amazing 2nd place with 227 points, only narrowly missing out to the overall winners St
James. Well done to the whole Ashley team. We are so proud of you!

On Saturday 23rd March, children from Years 3-6 represented Ashley School at District Cross Country. All the children did us proud against some strong competition. The under 9 boys came second overall, the under 10 boys came third and there was a fantastic second place run from Lily in the under 11 girls event. Well done everyone! 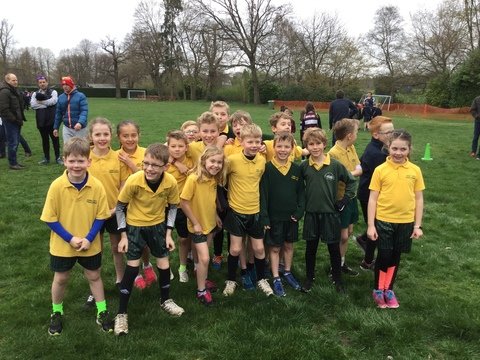 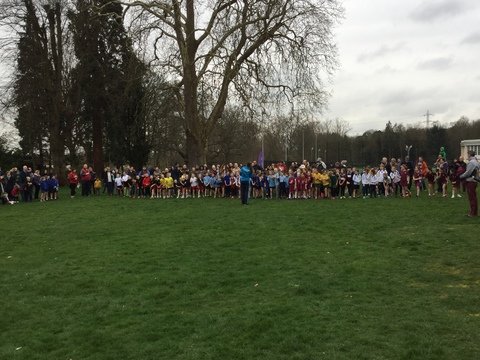 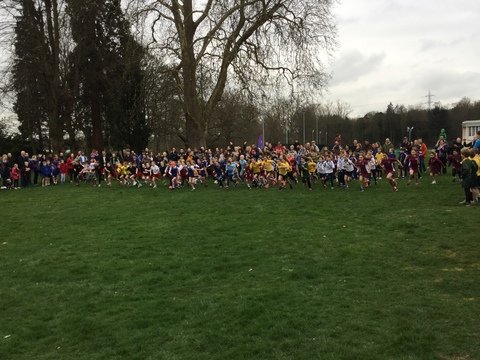 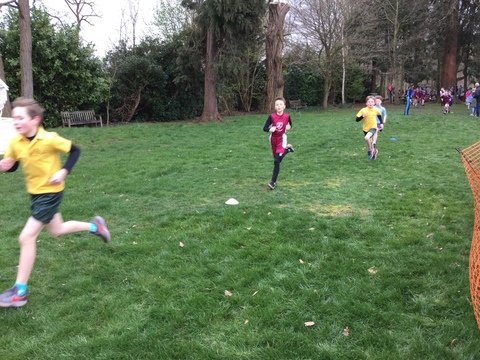 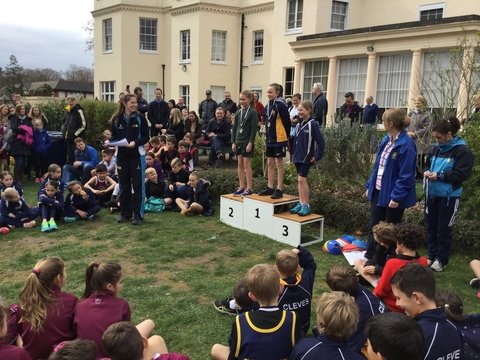